Jos Divis was a historic New Zealand photographer. Jane Scadden was behind the scenes during the filming of a documentary about his life.

Brass, Glass And Gold: A journey back in time. 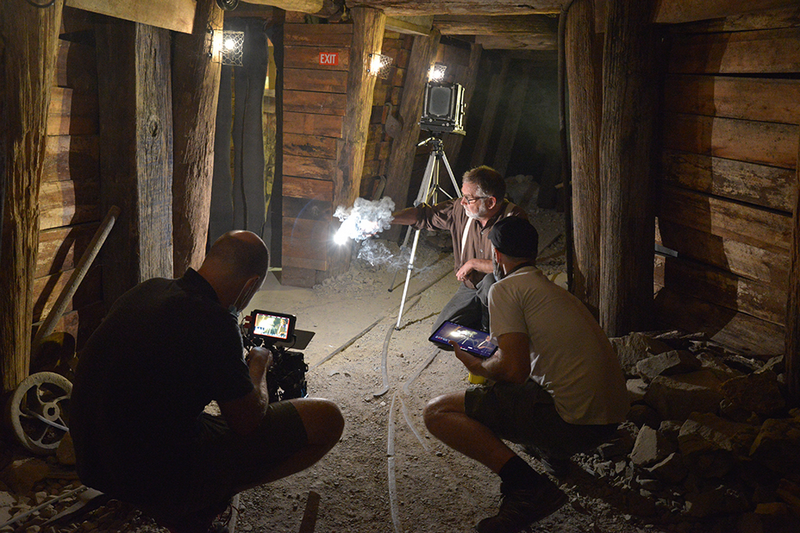 An email out of the blue set a Wairarapa-based photographer on a recent expedition to a small town on the West Coast of the South Island, New Zealand. Brian Scadden ( who is the ‘godfather’ of New Zealand wet-plate collodion photography). 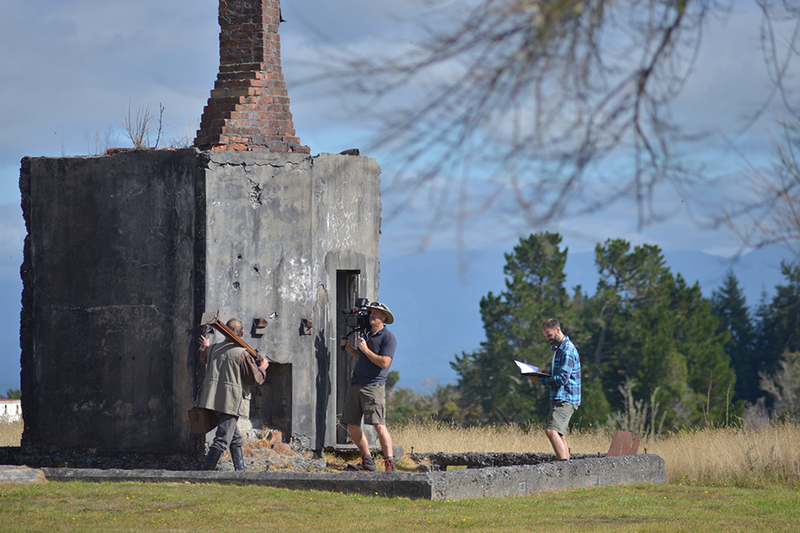 Filmmaker Dave Kwant from VISIONCO  was in the process of documenting the life of 20th-century miner and photographer Joseph (Jos) Divis (1885 – 1967).

Jos Divis, was from  Bohemia (which is now part of the Czech Republic) made New Zealand his home in 1909. He captured much of the life of the isolated mining town of Waiuta. Waiuta is south of Reefton on the west coast of New Zealand’s South Island and has a current population of 927. 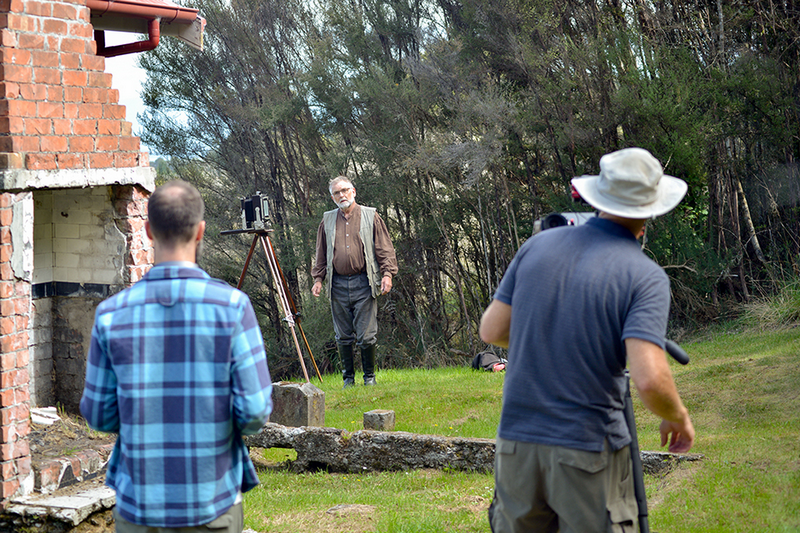 Brian was invited as the ‘expert on set’. However, he ended up taking centre stage with his period-style clothing and large-format camera and tripod. His wife Jane captured many behind the scenes images (with a Nikon digital camera).

Filming took place over two sunny days. Brian was directed around various locations in what is left of the mining town, ruminating over what life must have been like, and the difficulties Jos must have overcome to capture his dry-plate images. 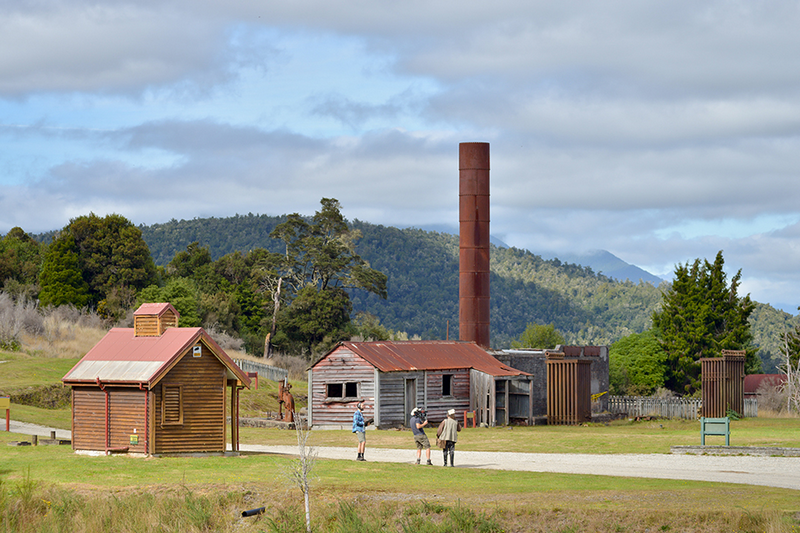 Jos loved his town, capturing moments as varied as cow-milking, weddings, family life, big and small events, and miners at work.  He sold his images almost from the get-go, many to the Auckland Weekly News. Many pre-1920s were made into stereoviews and postcards as postcards were cheaper to send than letters!

It has been said that Jos was a ‘foreigner with an artistic bent…a man who was slow and fussy…held high standards’ and that ‘he carefully planned his scenes.’ An interesting aspect of Jos’s work was his use of the ‘selfie’. Divis can often be seen in group photographs or on his own in a landscape setting which provided a sense of scale. Brian demonstrated how a hose with a bulb at the end could be laid on the ground and held discreetly to fire the shutter. He also showed various self-timers which could have been used. 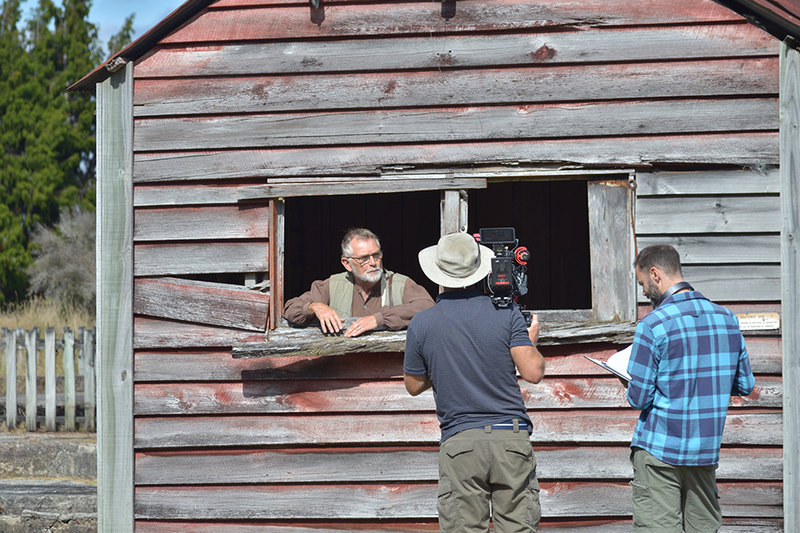 Always up for a challenge, Brian attempted to replicate a few early photographs – one of an elevated view, another was of Jos standing out front of his house. Unfortunately, time and nature have removed many of the identifiable landmarks. A more difficult task was to capture an image underground, a skill which Jos had mastered.  Using a magnesium ribbon, Brian demonstrated the limitations of the process with the assistance of a couple of bearded chaps from the local Bearded Mining Company. The experiment was carried out in a replica mine at the Reefton Visitors Centre with members of the local fire brigade, who were a tad concerned due to the hazardous nature of burning magnesium.  The resulting dry plate was a little underexposed, despite the eight-second exposure and extremely bright light.

When the mine closed in 1951 due to a collapse in a ventilation shaft, many of the houses were sold or taken with the miners due to the shortage of building materials at the time. Within 12 months, it was a ghost town. Ever loyal, Jos remained on until ill health forced his move to Reefton in 1965. 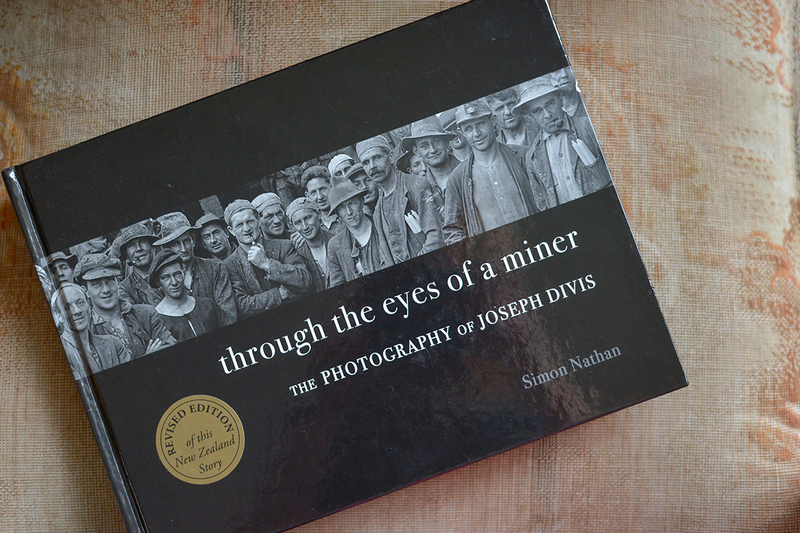 After filming at Waiuta, the team travelled an hour southwest to Blackball (home of the locally ‘famous’ Blackball Hilton). It was here that Jos had first stopped in 1909. He moved to  Waiuta in 1912.  Filming continued relatively unimpeded except for a wandering, nosey Shetland Pony which was being taken for a ‘walk’ up the main street by its horse riding owner.

Brian and Jane discovered Reefton to be a hidden gem. The accommodation was cosy, Nana Ni’s pies and takeaways were scrumptious and the weather was typical West Coast in the summer – misty and moody in the morning followed by warm settled days. It was during her ‘down time’ that Jane enjoyed using her various film cameras – a 1918, 120 format Kodak classic, a Horizon 202 panorama and her Olympus Trip 35. Brian and Jane took the time to explore the nearby neglected Lyell cemetery, gold panning, chatting to the ‘lads’ of the Bearded Mining Company and taking in the plethora of items in the Reefton Museum.

Waiuta operated from 1908 until 1951. Nearly 700,000 ounces of gold (approx $1 billion worth in today’s money) had been removed. Currently, a mining company is digging a tunnel at a 90 degree angle to intercept the original shaft and reinstate operations. They believe that they will remove in ten years, as much gold as was removed over the original 45 years.

In a few months Brian, David and Jonny will view the Jos Divis glass plates which are archived at the National Library in Wellington.

There is a book on the work of jos Divis by Simon Nathan. “Through the eyes of a miner. The photography of Joseph Divis.”

The team on site were David Kwant (camera), Jonny Eagle (Director) and Brian (the godfather)

WHISPERS OF GOLD https://visionco.co.nz/latest Commissioned by The Friends of Waiuta. A tale of boom and bust and a West Coast town that refused to die.