Filmboy24 is hosted by Mike Long.

Mike Long is a Florida filmmaker. He hosts “Filmboy24”, a YouTube Channel centred around analog film. 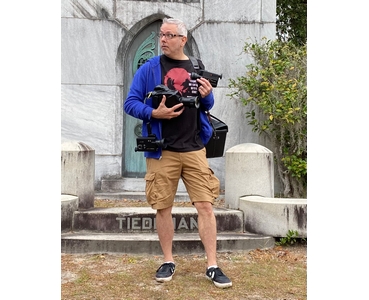 Mike Long is a Florida filmmaker. He hosts “Filmboy24”, a YouTube Channel centred around analog film. The format is personal, and we accompany Mike on a journey of mostly movie cameras, film processing and found film reviews.

“I am fifty-four years old. I grew up with film. We had 110 cameras and disk cameras around us. They were easy to use, even if the quality was poor”, Mike explains. “My interest in moving pictures followed. In the mid-’80s I graduated High School and started embracing Super 8. At the time video formats such as VHS were super expensive”.

“1984-1988 were my formative years with cine film. I started making short films on Super 8. I’m a horror fanatic. I love the low-budget ‘80s horror stuff. But, I never made a full-feature film”. 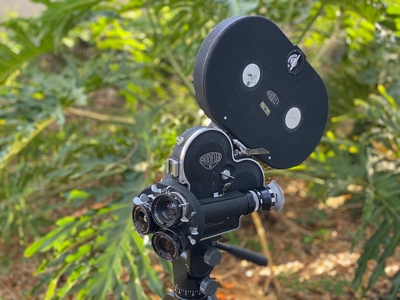 “Then life happened. I was in my early 20s and had a job. In the early 1990s, there weren’t a lot of colleges offering filmmaking in Daytona Beach. I found a school that was offering a filmmaking course for the first time and signed up for class after class. It was a great experience. We covered learnt how to use a Super 8 camera properly and of course, we met people. There are guys who I am still friends with today”.

“I started buying a lot of Super 8 cameras. I must have owned 3-400 cameras in my life. I ended up with so many that I started selling them on eBay”. Mike laughs. “Back then there was just one page of Super 8 cameras on the whole of eBay”!

“I started collecting 16mm cameras as well. My first 16mm camera was an Arri. An Arri 16ST is still my favourite camera today”. 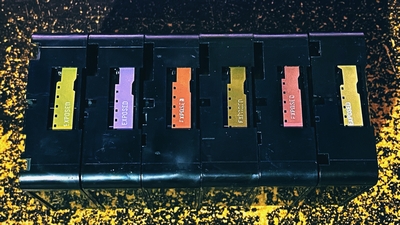 “I shot the most Super 8 between 1990-96. Back then a Super 8 sound cartridge cost just $4.00. There was an alleyway from my apartment to a Pic n Save store. Processing cost something like $4.88. I walked that route almost daily”.

“Back then I was editing by cutting and splicing physical film. I made a short clip of my brother’s friend shooting basketball. In each shot, he started further from the hoop. I edited it together and created a special effect where it appeared that he sailed through the air toward the hoop before taking the shot”.

“Then I got married. I am lucky because I have the greatest wife in the world. We have made a bunch of short movies together. They have all been shot on digital. We made 8 movies together in 15 years. I’m planning on showing some of them on my channel”. Mike smiles. “My wife does not like being in front of the camera though”. 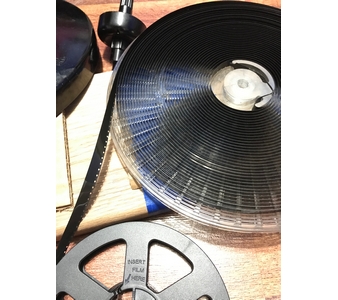 “When Covid came, I really got back into shooting film. I started the Filmboy24 channel in mid-2020. I started talking about processing and scanning. I have over 100 films waiting to be processed”.

“Back in the day, I was a Kodachrome guy. I just liked the colours. I used to shoot Kodachrome sound film. These days I have a love, hate relationship with Kodachrome. I develop it as a black-and-white film. Film manufactured in the 2000s is usually OK. But most of the older film from the mid-90s or earlier is just a mess. It is often really fogged”.

“I got into found film by accident. I was just starting to process my own film. I bought a camera that had an old cartridge still inside. I thought that it would be a great way to practice film development. The results were dreadful. But there was an image. It set me thinking how odd it was that I am the only person in the world who has ever seen this family’s memories”.

“I started collecting shot & part shot film from garage sales and flea markets. People even send it to me now”, Mike explains. “I picked up one package that contained 18 rolls of of undeveloped, fully exposed Ektachrome 160 Type A sound film. The family were holding up signs saying things like “Florida Anniversary Trip, Day 4, Oct 15, 1886″. I think they wanted to have a permanent record on film of each separate event, independent of the film’s audio. I put it on my channel and the lady in the film contacted me. Her husband had shot so much film that they could not afford to have it processed. So it sat around for years. She had a clear-out when her husband passed away and left it in a box on the drive. I sent her a hard drive with the scanned footage”.

“Another guy sent me 4 or 5 50-foot rolls of 16mm film. This unprocessed film had passed from his grandmother to his mother and on to him. Commercial film labs would not touch it. After 60-80 years the images were mediocre. But they were beautiful”.

“If you look at the first comment, you’ll see the response of a brother (Mike Hagan) of the man that sent me the film. The man that sent it to me also commented (James Hagan) a few comments down. This was probably the most rewarding video I’ve posted thus far for me personally”. Mike Long/Filmboy24.

“I still want to make a feature film. I have written 35 pages of a script”. I asked Mike if he has considered applying for funding to make the feature film. “I do not think I am ready to do that. I need a strong story”.

“These days I am processing and scanning film for other people as a paid-for service. I am doing a lot of work transferring film to digital as well as some local media work. I will be shooting on film until the day that I can not pick up a camera anymore”. Mike smiles. “Or, if the world runs out of film, then I will put my camera down”.

You can see more of Mike Long at Filmboy24 at Insta @Filmboy24 and on Youtube at https://www.youtube.com/@Filmboy24

You might also be interested in a previous SilvergrainClassics article on experimental filmmaker Anna Kipervaser here https://silvergrainclassics.com/en/2021/01/anna-kipervaser-experimental-filmmaker-friday-focus/