VALOI 360 – A Promise worth Pursuit

Valoi 360 is a new project to make DSLR scanning of  film a better solution for film photographers while staying affordable, compared to other alternatives currently available. For this article we spoke with Arild Edvard Båsmo, the inventor and visoneer behind the Valoi 360 film carrier system. Currently the VALOI 360 system is being funded on Kickstarter, with its funding goal of 62.000 € almost reached and 42 days still to go. 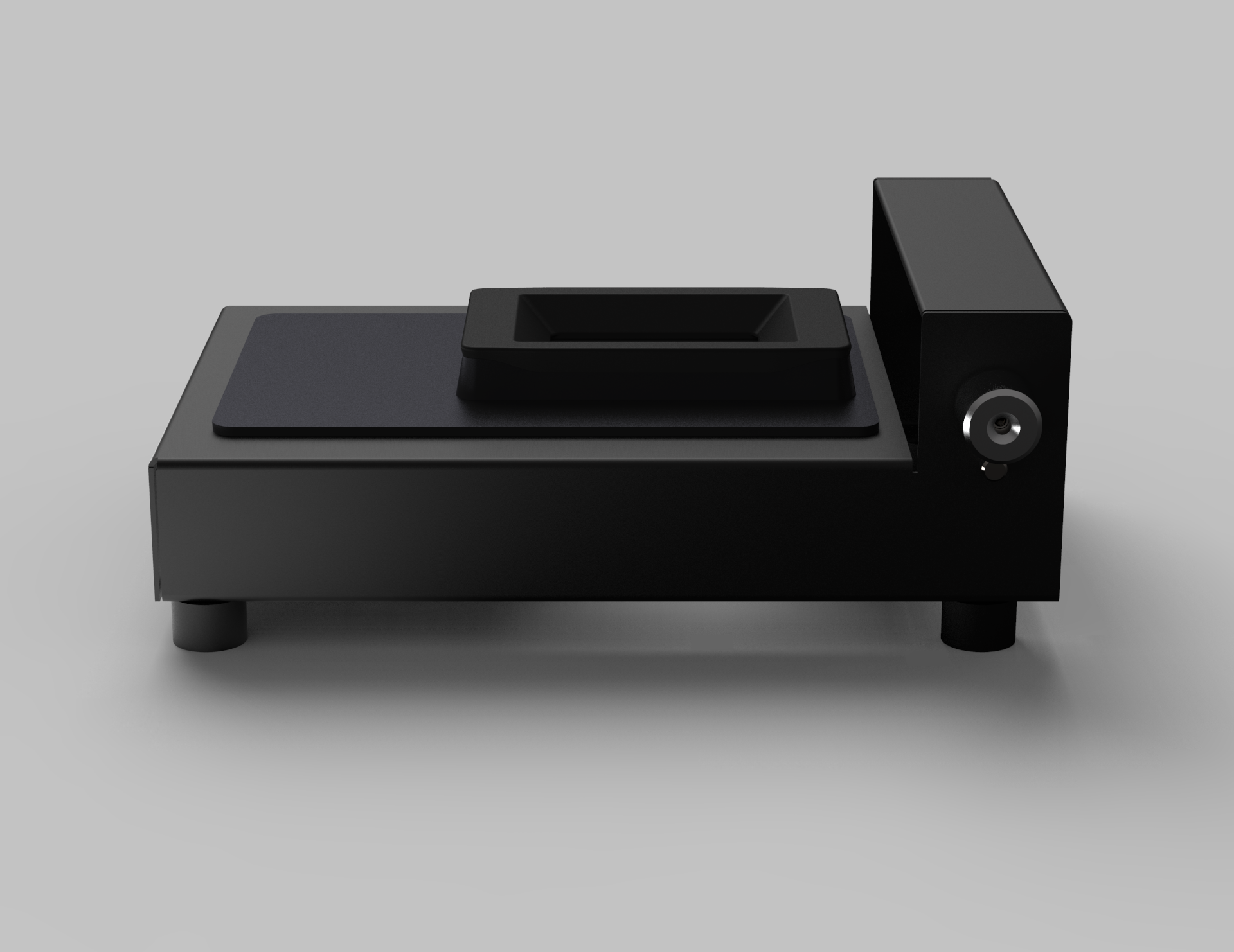 A render of the VALOI 360 system in its 135 configuration with optional advancer.

In recent years, digitizing or “scanning” negatives or slides with a DSLR has become a viable solution for many film photographers, professional and amateur alike. With many top-of-the-line dedicated film scanners aging and becoming more and more expensive, scanning film with a digital camera can be an easy and rewarding alternative.

A handful of questions remain, however: What light source should be used, what lens is best to capture the negatives, how to easily invert especially color negatives into positives, and how to hold your film as flat as possible, are only a few. In the last three years, many new solutions for these problems have become available for analog photographers. Especially in the area of film-holders for scanning, much has happened. With products from Negative Supply and Pixllatr, both high-end and budget segments of the market are catered to now, and lots of home-engineered 3D printed film holders appear on the internet now and then. So far, however, no product has been able to deliver the sweet spot of professionally required functionality at a somewhat affordable price. Very soon, VALOI 360 might change that. The paradigm behind it is to create a decent and affordable camera scanning solution that delivers both quality and functionality at a price even a college student can justify paying.

Arild, who invented the VALOI carrier and later teamed up with Dutch mechanical engineer Wicher van Lambalgen to help him with design, prototyping and production, is an avid film photographer himself. Being a BA student of English Linguistics though, Arild does not have the biggest budget when it comes to additional supporting gear for photography. Thus, he started to look for a viable and affordable solution that would fit his advanced needs. Initially he was very intrigued by the well-designed negative carriers made by U.S. startup Negative Supply, but was quickly put off by the high price. He simply couldn’t afford it.  Similarly, other, considerably more affordable solutions didn’t satisfy Arild’s expectations, so eventually he started experimentation on an own carrier that would in the end turn out to become the VALOI 360 system.

But what exactly makes the VALOI 360 such a promising candidate to fill the gap of a budget friendly, yet high quality product with professionally useable functionality?

In the beginning, there was plywood. And felt. Admittedly, not the best materials to make a negative carrier with, so very quickly Arild turned towards better suited materials, exploring 3D printing, sheet metal bending and other manufacturing processes. During that period, he learned 3D CAD, too, and subsequently was able to produce some early prototypes. 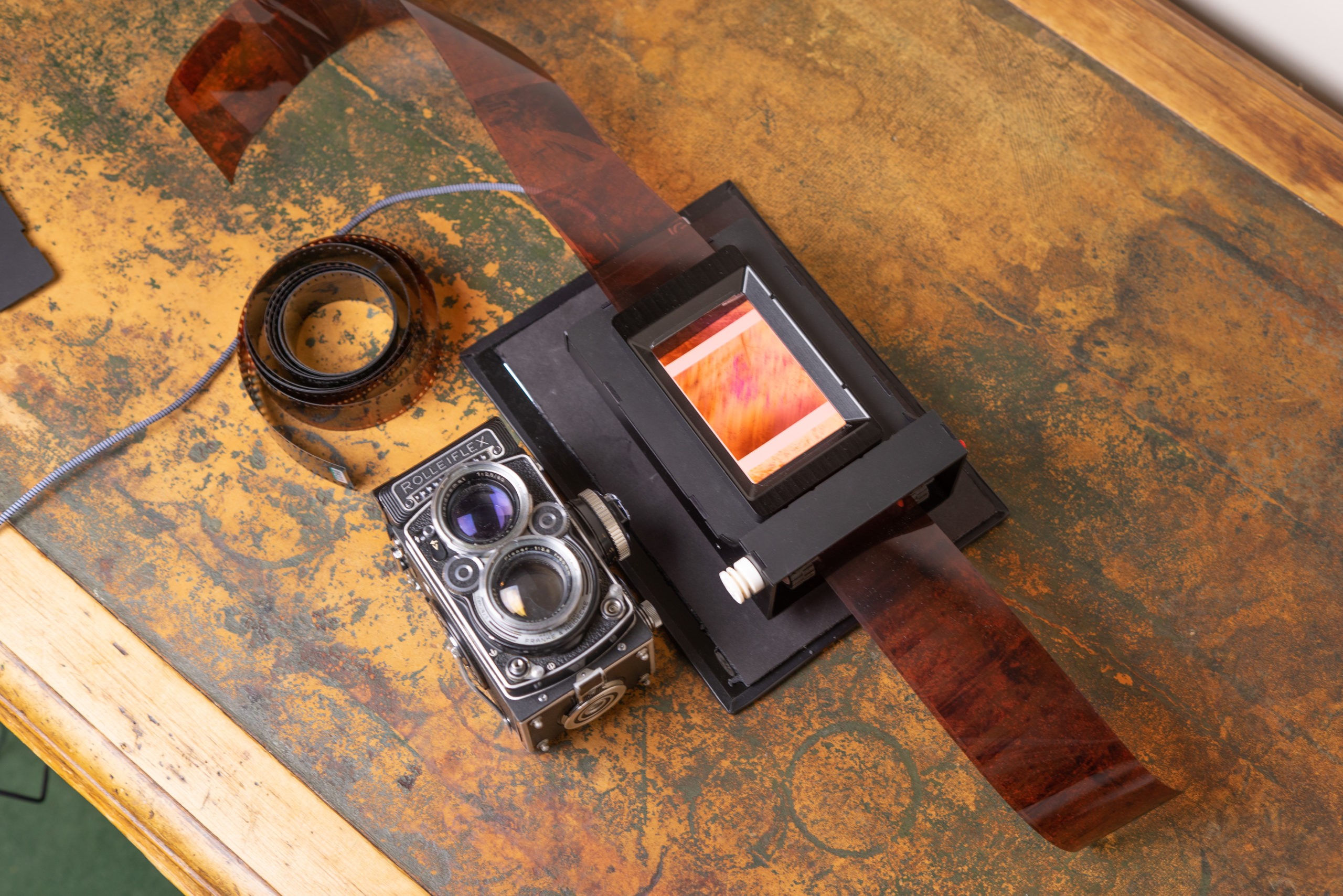 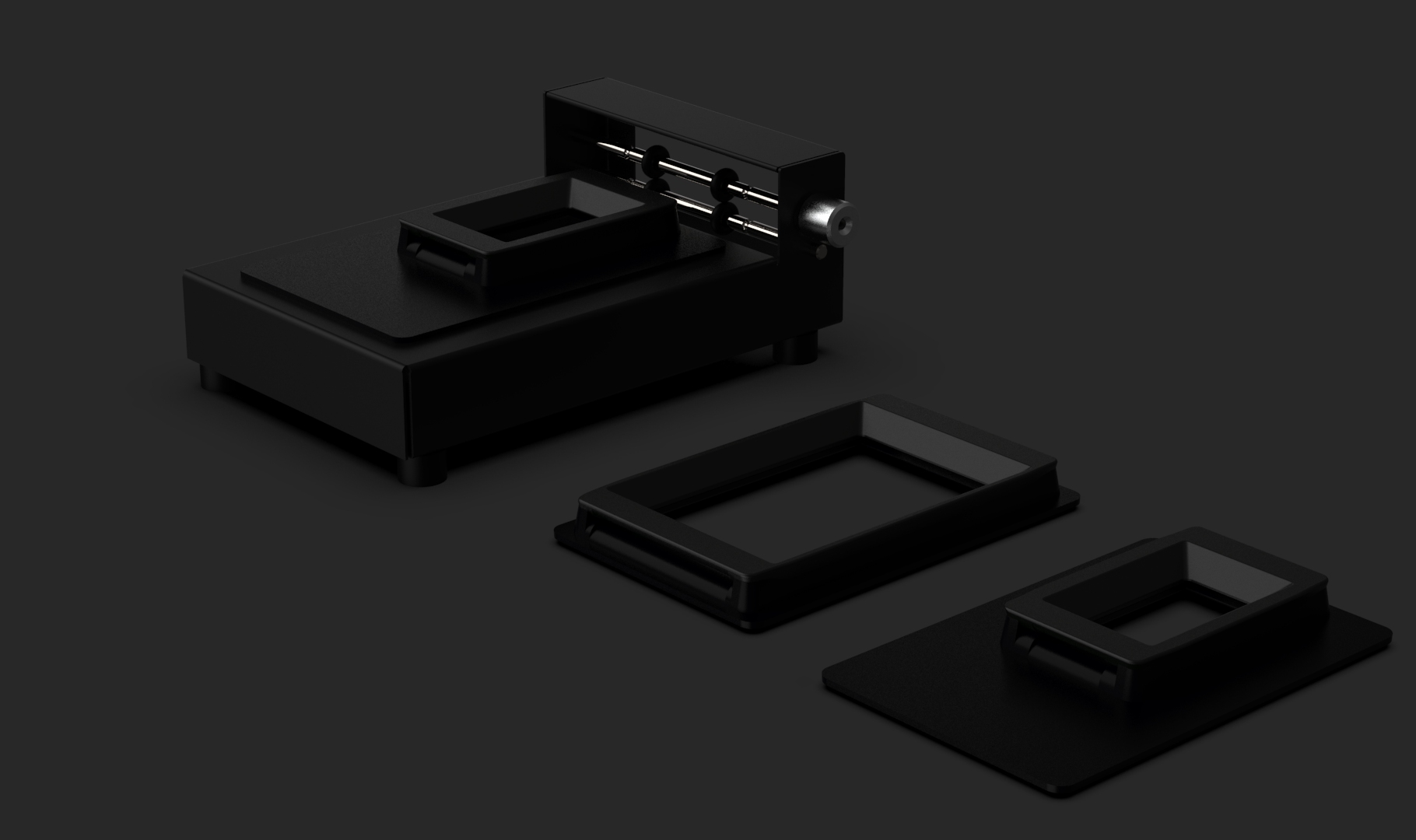 A render of the Advancer next to the two insertable film holders that can be used as stand alone holders as well.

The culmination of these early works was a 700€ metal prototype he was able to fund with his student job and some privately sourced money. The protoype was good, but Arlid quickly realized that in order to fulfil his vision of an equally affordable and functional tool for film photographers to actually use, a different approach would be necessary.  Via a contact to Finland based Kamerastore, he teamed up with Wicher, who is a mechanical engineer with the necessary experience to streamline designs for production. After a short while, Wicher started to include his own ideas into the design and eventually, the VALOI 360 system as showcased in the very sucessful Kickstarter campaign, started to take shape.

In the end, but only a few weeks before the campaign went live, Arild and Wicher settled for a manufacturing process called injection moulding. Usually, this process is only feasible for huge volumes and is very expensive in up front cost, because the moulds need to be specially tooled. Through manufacturing innovations, in the last years it became possible though to produce smaller batches with injection moulds though, and because the material properties and tight tolerances offered by the process, the duo decided for the molds eventually.

Since injection moulding is still an expensive process, and every component must be injected into its own mould which costs about seven- to ten thousand Euros, the upfront production cost of the VALOI 360 system is very high, compared to other sucessful kickstarters for similar products. The entire system will not be moulded, however, because it is modular and can either be used as a full kit or just in parts, with the cheapest option starting at 19 Euros for just the 135 / 35mm film holder. The full, modular, system consists of a multi format advancer, the 135/35mm holder and the 120 holder. Of those only the actual film holders will be moulded from a high-density, high-gloss finished plastic by a company in the Netherlands. The optional advancer with which the film (both 135 and 120) can be advanced through the holders will be made from bent sheet metal. Originally, the team have looked into producing the advancer in Finland, but due to cost have ultimately decided to have this part made in China instead. This is however, no compromise in quality, but only a means to keep the system in its entirety affordable for as many photographers as possible. 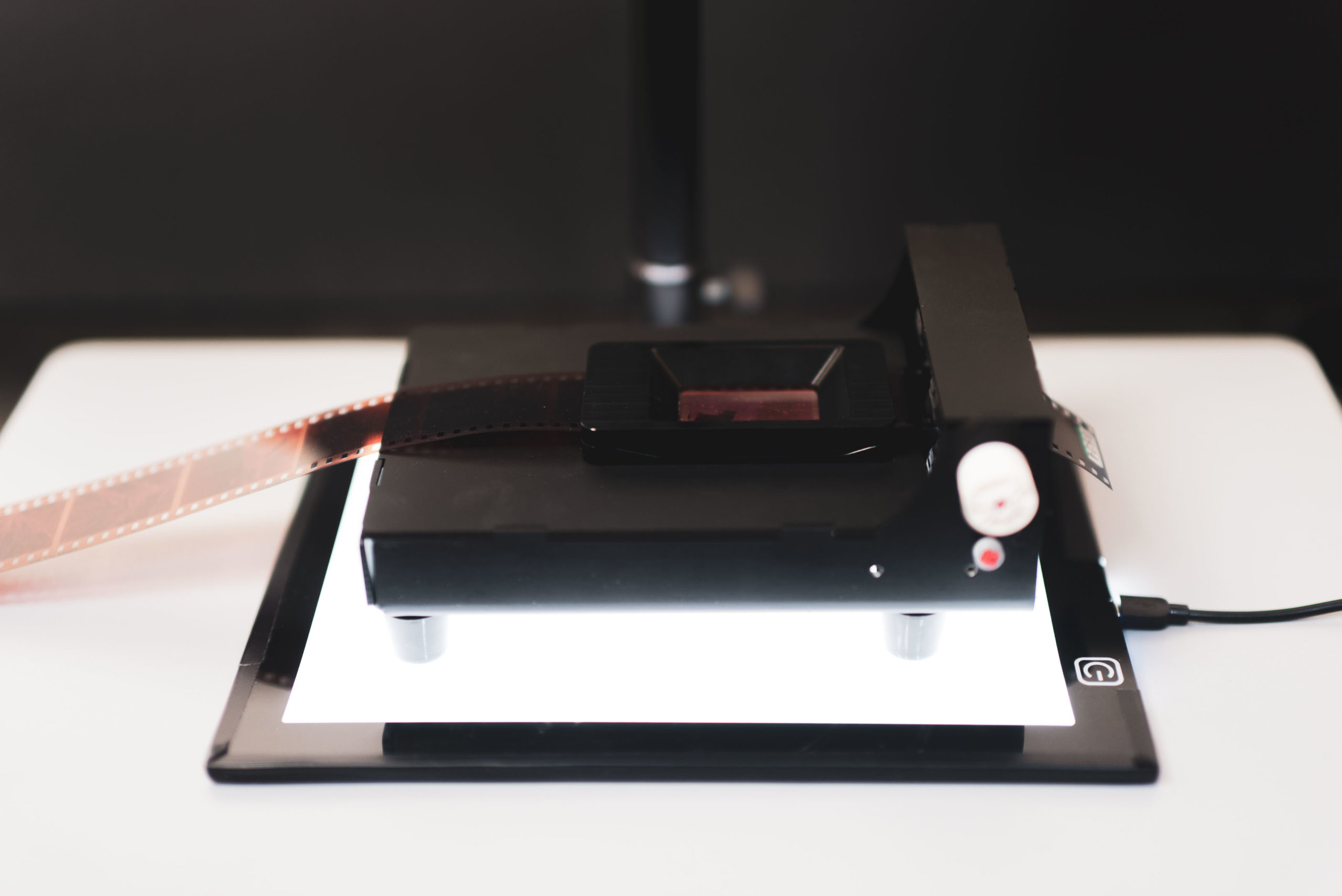 The current prototype advancer with the 135 film holder module inserted on an LED light pad. 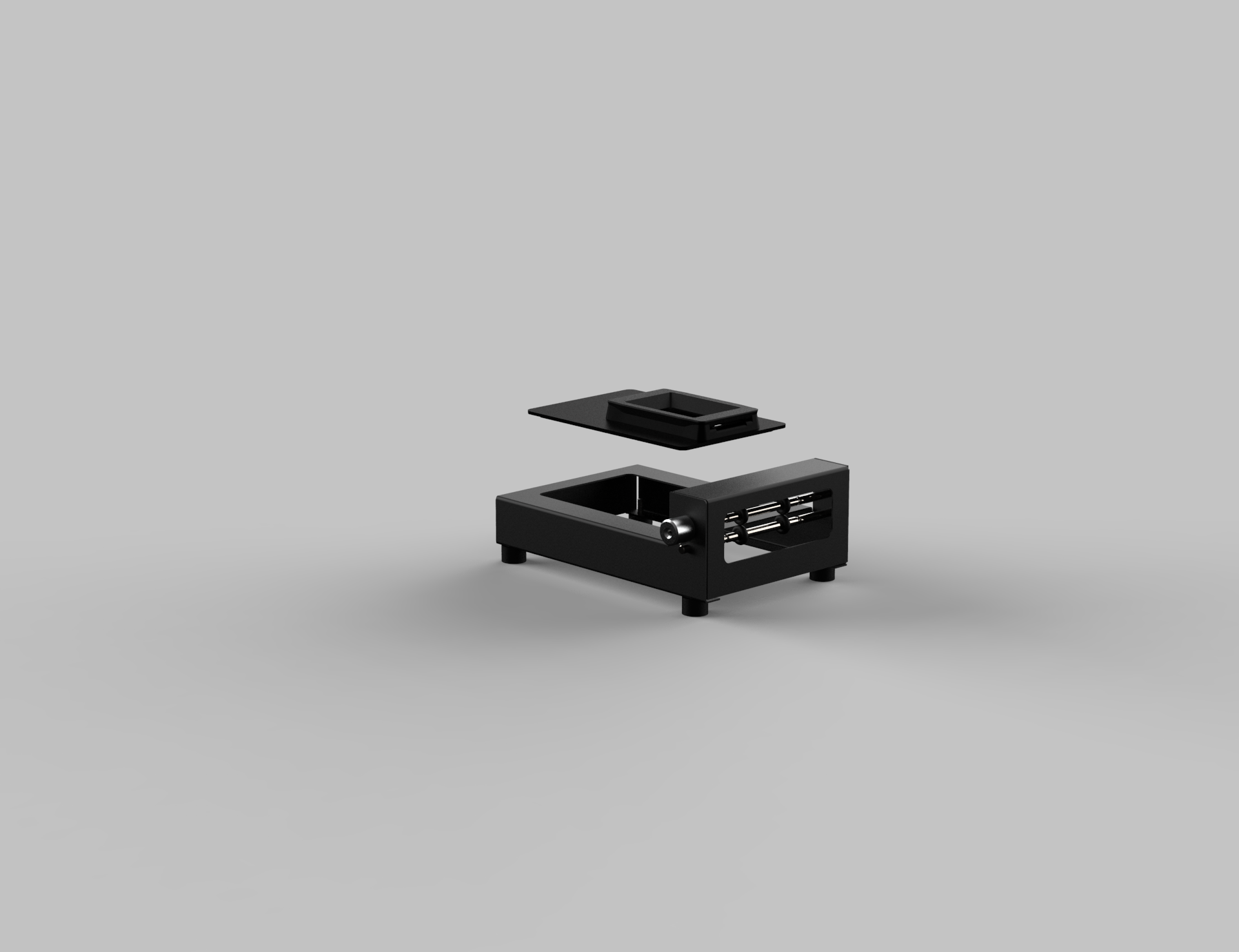 A 3D render showing the 135 film holder module floating above the advancing unit which transports both 135 and 120 films.

A problem with many currently available film carriers intended for DSLR scanning is film flatness. The VALOI 360 system anticipates the issue of curly film by employing a two-step approach that essentially counteracts film curl with the design of the carrier. By guiding the film through the holder along a 0.3 mm narrow path, which limits dorsal film curl on the long side, in a double S curve, the holder cancels out lateral curl on the short side, too and effectively keeps even curly film sufficiently flat. Not only is this design effective, but also economically sensible since it does not require specially tooled clamp assemblies like for example the Negative Supply holders use.

For the photographers using VALOI 360 this bears two advantages: First, the cost of manufacture and thus the retail price is lower. Second, and perhaps even more interesting, the modular design consisting of seperate film holders and optional advancer, remains open for future additions like customized inserts for non-standard formats. While Arild would neither confirm nor deny the production and development of those “what-if” add-ons, because right now the focus entirely lies on the existing product, he acknowledged the system’s readiness for future expansion.

The retail price of the 135 holder will be 19,99€ and for the 120 holder 29,99€. The entire kit including both film holders and  the film advancer will cost 199,99€. The advancer will be sold separately though for approximately 159€, creating a slight incentive to buy the whole kit.

In the future, more film photography quality products geared towards the affordable market segment may come from VALOI, a small company with an honest philosophy and a belief in making their products accessible and affordable but first and foremost functional.

The VALOI 360 system will be distributed starting early April 2021 by Finnish analog photo supplier and camera dealer Kamerastore. You can support VALOI 360 here on Kickstarter or check out their website under www.valoi.co

… Since you´re already here, we have a favour to ask. We want to provide these online articles free to the world. We see it as our contribution to the photographic community. But producing, curating, editing and providing this content for you is hard work and requires resources. If you enjoy this online content you can help by subscribing to our awesome analogue photography print magazine – SilvergrainClassics here.