During our visit to Leica in Wetzlar for a future article, we saw the Leicaflex SL2 MOT in a display case in the entrance hall of the building and placed our beloved Leicaflex next to it. 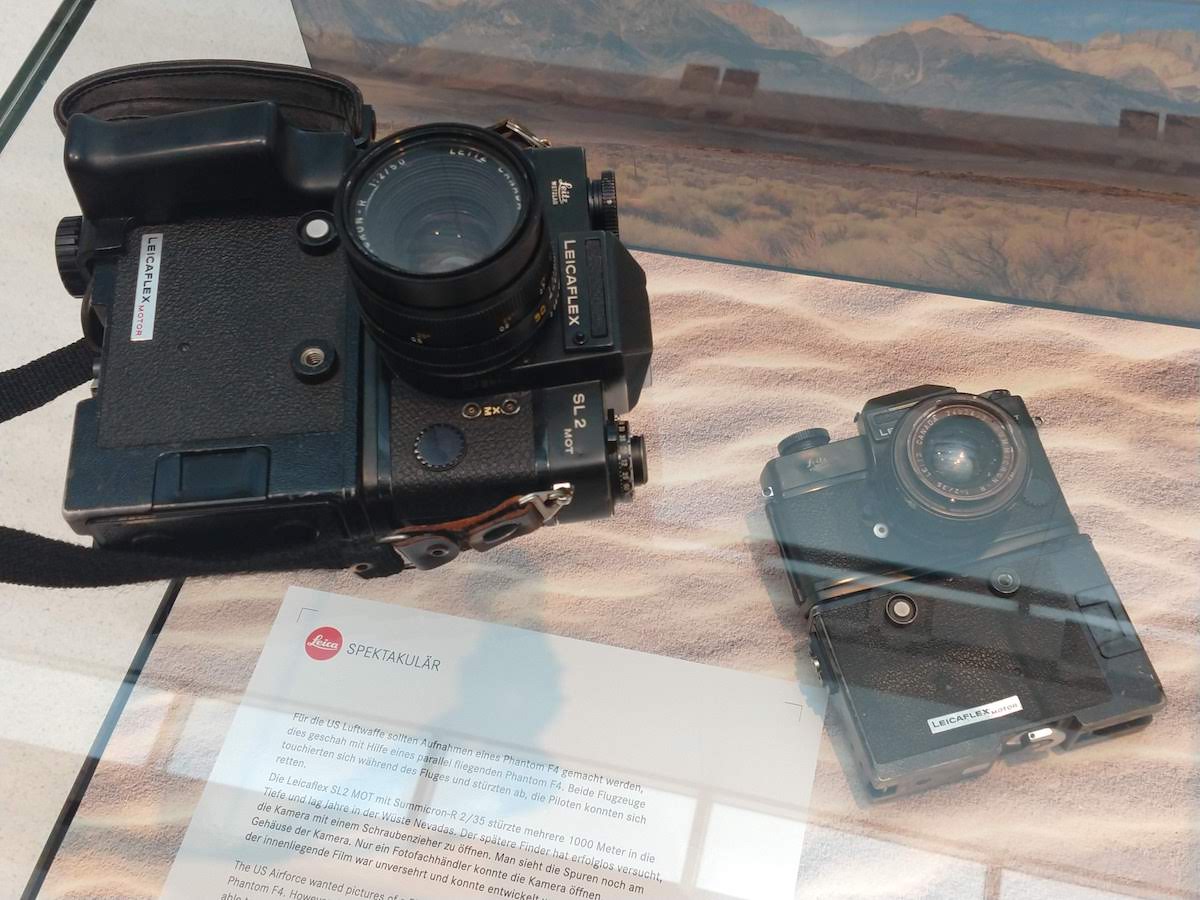 In 1981, the Leitz press service issued the following report:

The fact that the Leicaflex SL2 MOT crashed from a height of 8000 meters into the California desert is not visible on the camera. External damage from the impact was done to the lens, a Summicron-R 2/35 mm, as well as the back can no longer be closed, and the coupling parts between the camera and the motor were partially torn out.

What happened?
The Leicaflex in question, which is on display in a showcase in the visitors’ entrance at Leica in Wetzlar, belonged to the American photojournalist Mark Meyer, who specialized in aircraft photography and used Leitz lenses with focal lengths ranging from 19 to 800 mm to photograph practically all Western aircraft types in flight as well as on the ground and during combat training missions.

Ejection seat rescue
The crash test for his camera began when Meyer took off in a ‘Phantom II’ for a flight over the California desert to photograph an interceptor of the same type in flight from all angles. Among other things, he also wanted to photograph the McDonnell Douglas F-4 at close range from above with a 35 mm wide-angle lens, so he asked the pilot to put his aircraft over the other Phantom. As the two planes sped along at 26000 feet in mirror flight at 1,185 mph, the speed of the upper plane dropped unexpectedly, and it bore into the lower fighter. Meyer and the pilots were able to eject from the crashing aircraft using the ejection seat, but the camera slipped from his hands and plunged five miles into the deep. Meyer fortunately landed by parachute, but was unable to retrieve the Leicaflex despite an intensive search.

It was not until a year later that a U.S. Marine infantry maneuver brought the ‘missing link’ back to light. While digging in, a grenade launcher leader came across the camera. In vain, Corporal Thomas Fisher in his unit to determine the original owner of the camera. Since the Leicaflex could not be opened and triggered, he finally put it aside until his discharge from military service.

Developing the film
Months passed again until one day Fisher, back home on the East Coast of the U.S., asked a photo dealer to take the film out of the camera and have it developed. Upon picking up the Kodachrome slides, which had not been affected by a full year in the hot desert sand, the repair price for the camera seemed too high. The price of repairing the camera seemed too high and he left it in the store. By chance, weeks later a Leitz representative saw the damaged camera and inquired about the cause of the damage. When he heard about
he remembered a newspaper report about the air disaster and the missing camera.

The search for the images
Meyer was investigated and it was determined that it was indeed his Leicaflex. As much as the photographer was happy about the recovery of the camera, he regretted the loss of the color slides. Thus began a renewed search for the unknown finder, of whom only the last name was known through the film processing. Through old recruiting files Fisher was finally found, and he delivered the slides in exchange for the $500 finder’s fee. Nearly two years after the crash, Meyer finally had his camera and the slides of the ill-fated flight
back. Although the repair costs would be worth it, the Leicaflex remained unrepaired, to be displayed in the museum of the Leica Camera factory in Wetzlar to document the robustness of German precision work.

Of interest for our German readers, our own Leicaflex SL2 MOT, of which only about 1050 units were built, will be presented tonight at 19:00 German time by Benedikt Hartmann on the Youtube channel of the Leica Store Wetzlar, Germany. In addition, you can also win something there:
https://youtu.be/3GJWWe-CYZA 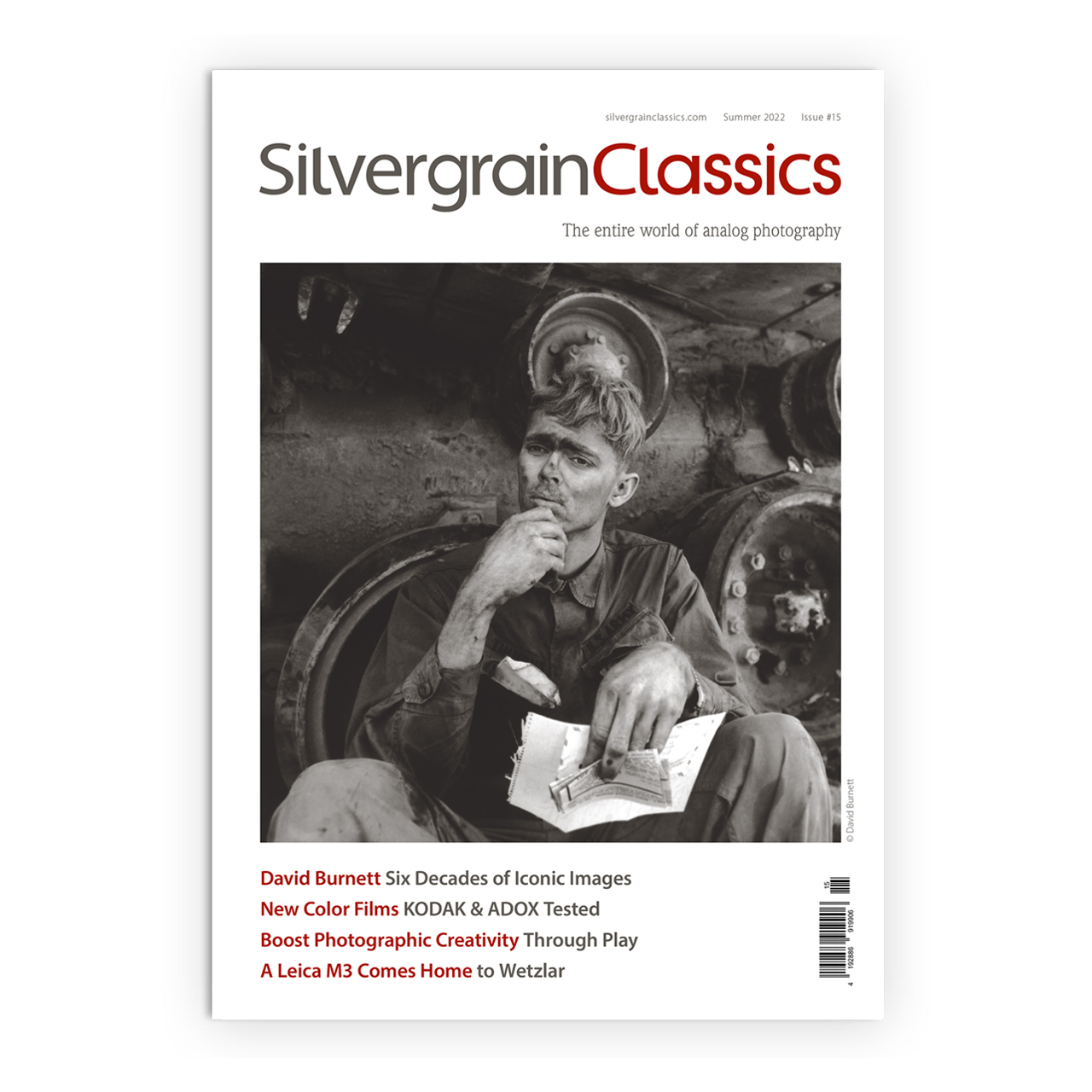