In Case You Wondered: Once Upon a Time on Instagram. Behind @kodakprofessional_europe
Today, many companies rely on Social Media for most of their communication, but often, they outsource this task to an agency or a full-time Social Media manager. Kodak Alaris, do it differently; a glimpse behind the scenes.
by Ludwig Hagelstein 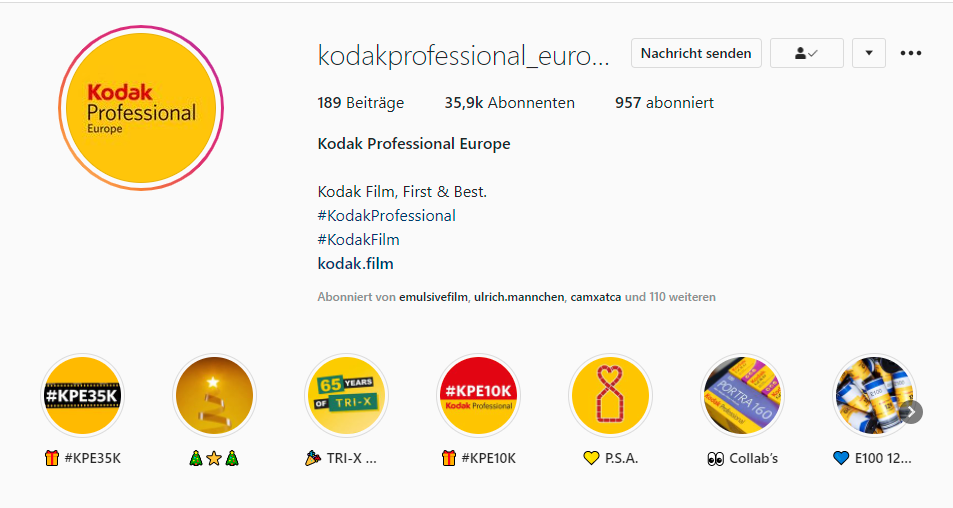 Kodak Alaris distribute and sell all of Kodak’s still photographic film and single use camera products around the world.  For some years now, the company has run several Instagram pages to link with photographers using Kodak film, but it was not until October 2019 that a dedicated page to support photographers in Europe was created. This Instagram page, @kodakprofessional_europe, was born with a passion to link with, and showcase European based photographers and their works, with a focus on further building-, and interacting with the European film-community

With the introduction of the new account in 2019, Kodak Alaris have made a big step forward to increase its direct interaction with photographers and film-afficionados, not only sharing and presenting images shot on Kodak films, but also directly connecting to their customers, utilizing the best part of Social Media; the social one. Most importantly, the account is not being run by a marketing agency, or a dedicated social media manager, but by those, perhaps most involved in Kodak Alaris’s still film venture, Andy Church and Charlie Abbiss, both of whom have a deep rooting in the industry and an even deeper connection to the medium of photographic film itself.

The purpose behind the account is not only to showcase film and photography, but “to create a platform focused on European photographers” and “to create a voice for peoples individual reasons why they choose to shoot on film”.  According to Charlie, the level of interaction with photographers is fantastic and incredibly interesting, showing that there are not only one or two, but hundreds of different reasons to shoot film. Both Andy and Charlie often browse the wealth of images uploaded by the analog community using #KodakProfessional or #KodakFilm hashtags on Instagram, and they then approach the photographers, enjoying the exchange of thoughts on the medium every single time. Currently, to ease in the New Year – one that hopefully will be better than 2020 – and to celebrate the magic number of 35 thousand followers, Charlie and Andy have started a celebratory competition, giving away 5 rolls of film for 7 weeks to those entering.

To participate, the only requirement is to post a photo shot on the type of Kodak film you want to win, explain in the caption why you want to win this film, and tag #KPE35K⁠ to be found.

If you enjoy our online articles, this might interest you: We provide these articles free of any charge. We don´t track you to sell your data, and we don´t bombard you with arbitrary and annoying ads. We do this, because we want to contribute something to the Analog Community, free for everyone to enjoy.

However, doing this is not exactly free for us: We pay our editorial staff, have operating costs and need to keep our business running. We cover these costs with our quarterly print magazine SilvergrainClassics, and we are mighty proud of it. So, if you enjoy these online articles, we can guarantee you that you will love our print magazine! If you want to support us, you might consider a subscription to our magazine. This way, you´ll get even more insight into the entire world of analog photography, and we can keep on with providing this free, but well researched editorial online content for everyone to enjoy!