Friday Focus: Valeria Jimenez and “My new enlarger and my first darkroom print” 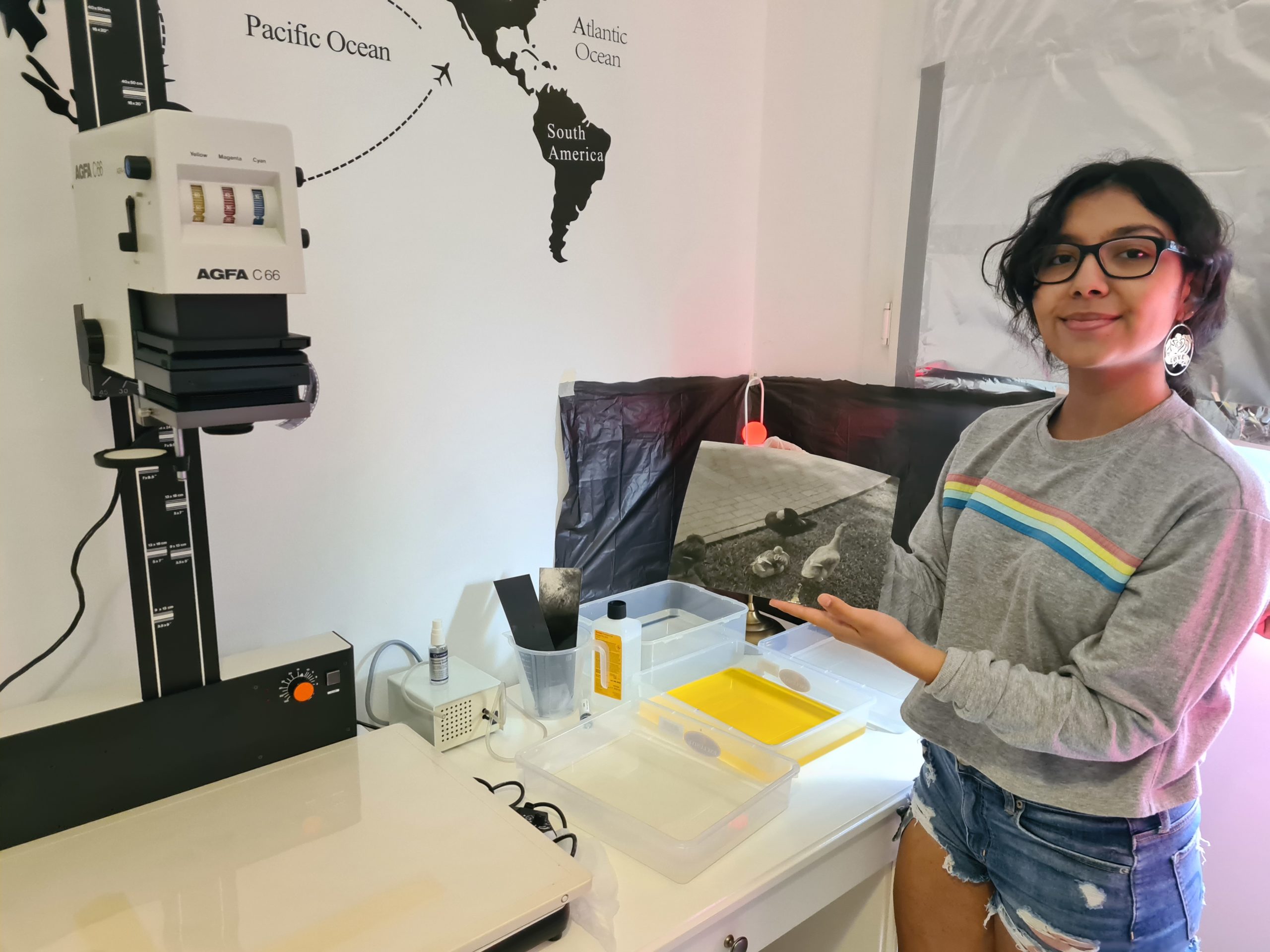 Valeria with her first print

“I accidentally found a big cardboard box containing an enlarger and another box of photography chemistry hidden in a room before my birthday. I could not wait to start printing on my own. I have developed colour and black and white film before, but the thought waking up and being able to go downstairs and create prints in my own darkroom was very exciting”, Says Valeria Jimenez.

Valeria Jimenez comes from Bolivia but has lived in Dubai for four years. She turned seventeen and had been given an Agfa C66 enlarger for her birthday. Manufactured in Italy by Durst, this is a combined  6×6 enlarger with an integral power supply, timer and exposure meter. It also has a dichroic colour head and a vaccum easel.

“As a teenager, I was not familiar with the chemistry and methods used in the darkroom. The first challenge was to make the room darkroom, and my parents came up with some good solution. We covered the windows with aluminium foil, and now my darkroom looks like a spaceship”.

“I developed negatives and printed some pictures in the morning with a friend who walked me through the steps”, explained Valeria.

“Later that day, I developed my first black and white film on my own. I am not very proud of the resulting images, but I did get all the steps right. I found keeping track of the timing was a little stressful, and I was scared of switching the chemicals around and ruining the roll of exposed film because I only had three waiting for development”.

“The enlarger didn’t have a 35mm mask to help position the film, so it took me longer to centre the image on the baseboard than it did to load the film into the reel. My first print was a little dark but the second was very good. I didn’t know that looking at images in the darkroom could change your perception of values, and when I looked at my pictures in the sunlight, I discovered a completely different idea of the print”.

“While making a test strip, I forgot to turn the enlarger off and I opened the bag of paper almost below it. I realized a couple of seconds later and I thought the paper was ruined and that I would have to throw away a bag of paper. After turning the enlarger light off and checking the picture it turned out fine. This was a relief, even if the picture was a little too dark”. 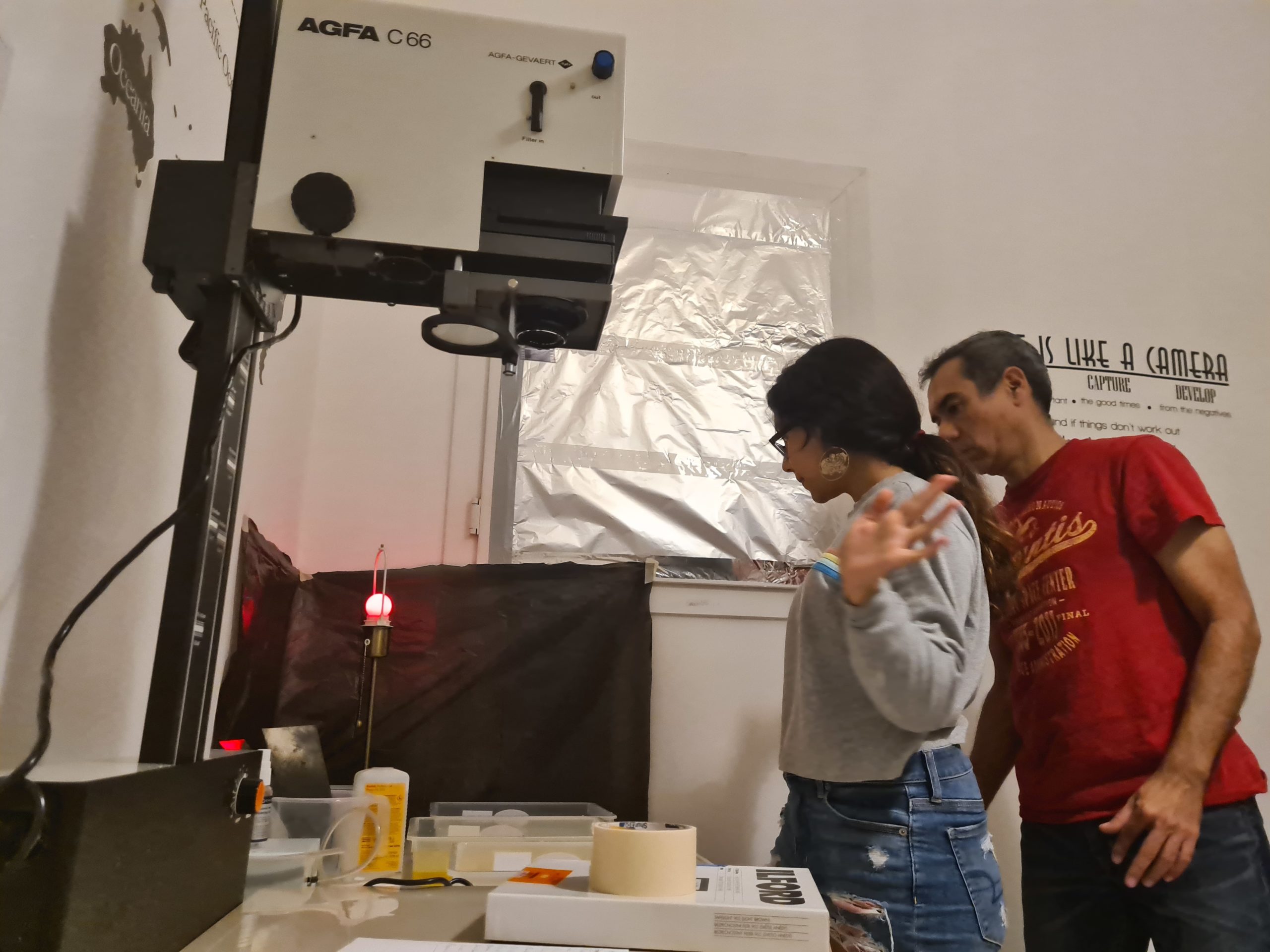 Valeria and her father Murilo. 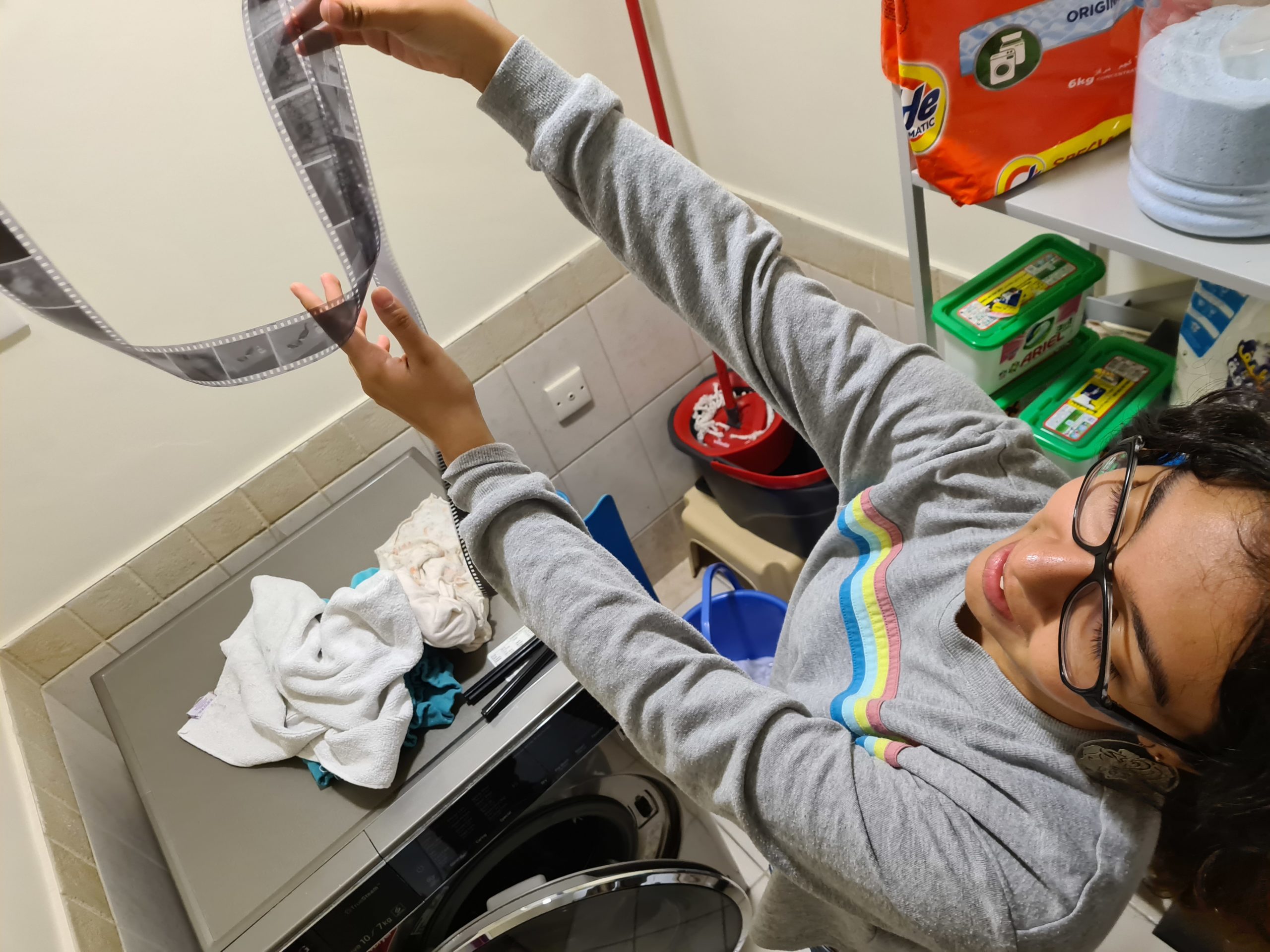 “One of the pictures I took had columns of lights which I didn’t really notice when I took the shot but ended up being one of my favourite parts of the picture because it shows the glow of the light on the glossy paper. I think I will try to take more pictures with light sources in them”.

“The pictures I took were mostly about daily life in the place where I live. Looking at them after development gave me a real feeling of achievement. It was a very different feeling than having someone do it for me”.

“I feel that the time I trying to improve my prints in the darkroom was a very a reflective experience.  I felt as if I was making art and learning something new, and using my judgement to shape the picture to how I wanted it to be”.

“I spent many hours in the darkroom without really noticing the time, I only left because the basement door beside me was open and I got scared”!