Ahsan Ali’s interest in photography was piqued in 2018 when a friend asked him to take delivery and test a Canon DSLR.

A few weeks later he had developed his first roll of film at home, with the “Ilford Processing B&W film” video as reference and a couple of Instagram messages to his instructor in Seoul. A year later he had shot & developed over 200 rolls of film.

Ahsan claims to have found his focal length. “I’m definitely a 50mm guy,” he said, “but I still like to try out new focal lengths and new perspectives. Form imposes function. Every focal length forces you to see things differently.” Asked about his extensive collection of cameras, he says “A camera is just a box to capture light but some boxes provide features that force or enable you to photograph the world in a different way.”

At a presentation by photographer Essdras Suarez he was encouraged to try shooting wide-angle. While visiting Japan, he shot architecture and street scenes with a 15mm Voigtländer lens. He cropped these to 16×9 format in Lightroom, and so began his interest in panoramic photography.

While researching panoramic cameras, he found Jeff Bridges Widelux work which showed him the world from yet another perspective. He was so inspired he that he ordered himself a Widelux F7.

Ahsan was aware that swing lens panoramic cameras distort the horizon, but he didn’t realise how difficult it would be to use in practice. He particularly struggled with the limited shutter selections of 1/15, 1/125 and 1/250th of a second. He shot a single roll of Ilford Delta 3200 and promptly advertised the camera for sale. But when he developed the roll and saw the results, the advertisement was quietly taken down. And so began Ahsan’s love affair with the Widelux.

Uzbekistan only opened up to tourism a few years ago and it appealed because it seemed colourful, friendly, economical and relatively uncrowded. Ahsan travelled from Tashkent to Samarqand and then onto Bukhara. Indoors, he shot Kodak Portra at ISO 400, 800, and 1600. Outdoors, he shot Cinestill 50D, Fujifilm Industrial 100 and Kodak Ektar 100. He was unable to use 1/125 or 1/250 due to banding issues that had developed in the camera, and so he was still limited by the available lighting with only a 1/15 shutter speed.

When he returned to Dubai, he decided to get Widelux filters to address the limited shutter speeds but since they were $300 on Ebay, he decided to have them 3D-print them instead. Australian photographer Jason De Freitas provided him with the model.

A cafe in Samarqand.

During Lockdown, Ahsan read everything he could about Widelux repairs, and dismantled the camera himself. He repaired the shutter banding issue, only to notice other problems that he did not have the tools to address. 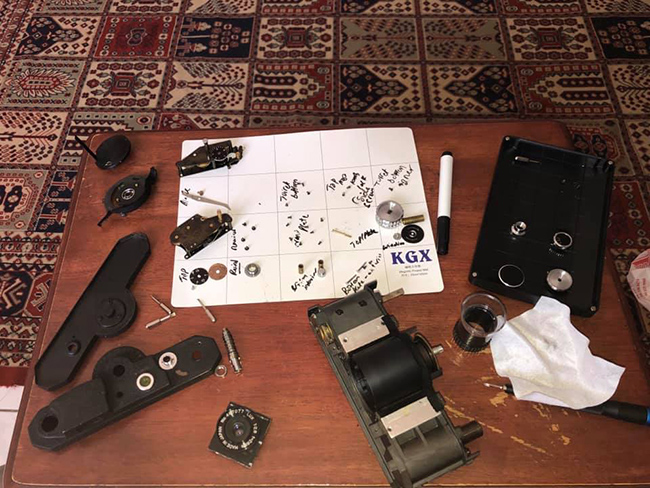 I asked him about how he would sum up his photographic experience with the Widelux. “The Widelux is completely different from other cameras. It forces you to move your head from side to side as you walk the street, and you see things that you might not have otherwise noticed. It widens your perspective.”

Stairway to Heaven. The roof of a carpet bazaar in Bokhara.